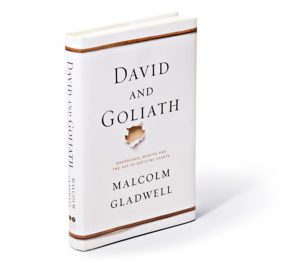 Underdogs, Misfits and the Art of Battling Giants.

This is another classic by the prolific Malcolm Gladwell

A 3 parts, 9 chapters book that will get you to engage in reverse thinking as you journey through its pages. You will see how what we call disadvantages can actually mean the opposite when one takes a cursory look and chooses to hold the right perspective.
In short, ‘failure’ can actually be a crucible for ‘success’ if only people choose to see things differently. What people call disability is actually an unpopular kind of ability (that’s why a blind person has a sharp and heightened sense of listening). A loss here is a gain there. Find out about people suffering from dyslexia and you will discover a bit more about this. There is really no such thing as a disability.
The book, David and Goliath chronicles what happens when ordinary people confront giants. Giants…meaning powerful opponents of all kinds—from armies and mighty warriors to disability, misfortune, adversity and oppression.
….it contains insightful stories from real life happenings to history and to people’s personal experiences which were used to flesh up two thematic ideas:
– The most valuable things in our world today arose out of adversity and conflict (theme 1);
– And these conflict are often susceptible to misinterpretations by the undiscerning (theme 2);
Other excerpts:
• Scriptural anchors as used by author:
– “But the Lord said to Samuel, “Do not look on his appearance or on the height of his stature, because I have rejected him; for the Lord does not see as mortals see; they look on the outward appearance, but the Lord looks on the heart.”
1 Samuel 16:7
– Some pretend to be rich, yet have nothing; others pretend to be poor, yet have great wealth. Proverbs 13:7
– I was given a thorn in my flesh, a messenger of Satan, to torment me. Three times I pleaded with the Lord to take it away from me. But he said to me, “My grace is sufficient for you, for my power is made perfect in weakness.” Therefore I will boast all the more gladly about my weaknesses, so that Christ’s power may rest on me. That is why, for Christ’s sake, I delight in weaknesses, in insults, in hardships, in persecutions, in difficulties. For when I am weak, then I am strong. 2 Corinthians 12:7–10
– I returned, and saw under the sun, that the race is not to the swift, nor the battle to the strong, neither yet bread to the wise, nor yet riches to men of understanding, nor yet favor to men of skill; but time and chance happeneth to them all. Ecclesiastes 9:11
• Ancient armies (like Saul’s army) had three kinds of warriors. The first was cavalry—armed men on horseback or in chariots. The second was infantry—foot soldiers wearing armor and carrying swords and shields. The third were projectile warriors, or what today would be called artillery: archers and, most important, slingers (which requires the most skill) as exemplified in Judges 20:16, (…they could aim at an ‘hairs strand’ and not miss). Very skillful lot. Infact, the best of the pack. From these, the truth is, David had the upper hand over Goliath contrary to the idea we have held about this story –where power/strength is only represented in physical size whereas, power can come in other unpopular forms as well.
…..while Goliath saw David as too small to hit, David saw goliath as too big to miss.
• There is a set of advantages that have to do with material resources, and there is a set that have to do with the absence of material resources—and the reason underdogs win as often as they do is that the latter is sometimes every bit the equal of the former.
• “We spend a lot of time thinking about the ways that prestige and resources and belonging to elite institutions make us better off. We don’t spend enough time thinking about the ways in which those kinds of material advantages limit our options.”
• “People are ruined by challenged economic lives. But they’re also ruined by wealth as well because they lose their ambition and they lose their pride and they lose their sense of Self-worth. It’s difficult at both ends of the spectrum. There’s some place in the middle which probably works best of all.” (Wealth contains the seeds of its own destruction.)
• “We are all of us not merely liable to fear, we are also prone to be afraid of being afraid, and the conquering of fear produces exhilaration. The contrast between the previous apprehension and the present relief and feeling of security promotes a self-confidence that is the very father and mother of courage”
• “There are real limits to what evil and misfortune can accomplish. If you take away the gift of reading, you create the gift of listening. If you bomb a city, you leave behind death and destruction. But you create a community of remote misses. If you take away a mother or a father, you cause suffering and despair. But one time in ten, out of that despair rises an indomitable force”.
• You see the giant (Goliath) and the shepherd (David) in the Valley of Elah and your eye is drawn to the man with the sword and shield and the glittering armor. But so much of what is beautiful and valuable in the world comes from the shepherd, who has more strength and purpose than we ever imagine!
That’s it (the little I could write)….but there is a whole lot more. Get the book and allow your mind open up to a whole new world of possibilities.