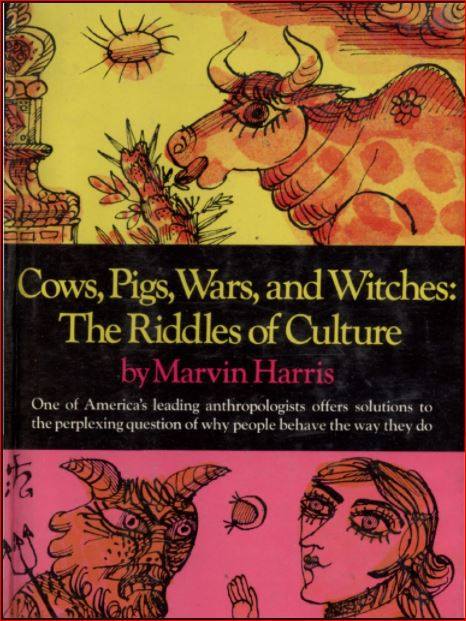 Author: Harris Marvin
This is a 6 chapter, 256 page book authored by a renowned anthropologist, Prof. Harris Marvin (anthropology is the study of human cultures & societies). The title was the point of attraction for me to the extent that I chose it as my first read out of the list.
Just as the title depicts, it talks about the different shades & evolution of human culture across the peoples of the world and a few learnings (in no part order includes):
• Cows are of great value to the Indian people…they don’t consider it as meat in the way we do and as a matter of fact, it is a sacred issue for them. It is actually a god that is worshipped and the author gave many historical reasons for this. (#Just so you know, the term ‘Sacred Cow’ was actually coined from this practice).
• People are beyond what the media say they are and a lot of times, the reasons we give for the way a people are is beyond how it appears….there are many nascent factors that causes a people to act in the way they do beyond what is visible (#It is the danger of a single story).
• “Primitive mankind used warfare as a means of population control in a bid to manage scarce resources & the ‘carrying capacity of the eco-system’”. (#Little wonder, most wars today are still largely a contest for scarce resources. But my question is, are the resources really ‘scarce’? )
• “When a group of people know that they stands to lose far more than they can gain from a war…they are forced to invent other means of resolving issues”. (#Little wonder we haven’t had a nuclear war….lol)
• At one time in our history (when there were no contraceptives, condoms and all of the birth control tools), the people of the time, deployed many crude ways of eliminating an unwanted child…an excerpt from the book says, – “….when all else fails, a pregnant woman lies on her back while a friend jumps forcefully on her abdomen”…. the mother is sometimes killed with the baby. (#We have indeed come a long way).
• While other animals depend on anatomical statue for survival….human adapts with culture and have grown well in it. We have grown more lethal in our inventions than the sharpest teeth of the biggest cats, longest claws of the fiercest of animals, the most venomous snake and all of these put together. Our primary mode of adaptation is culture and not biology (Our MIND is our DIFFERENCE).
• Part of the submission from the author is that people don’t work for wealth but the admiration/prestige that comes with it. (#Many don’t mind to live in a lie just to create an impression….and this funny culture is centuries old. It has only changed colour with time).
• Learnt about POTLATCH (#a new word for me) — * Potlatch is a maniacal form of conspicuous consumption and waste…..whose sole objective (amongst the American Indians at the time) was to waste more wealth than their rivals. That was their way of showing who had arrived. “People called for a feast and made their guests eat to stupor until they ran into the bush, dipped their fingers into their mouth and vomited some parts & they returned again to continue the feasting”. (#Meaningless consumptions all in a bit to make a statement. #In the way we have OWANBE parties today (in Nigerian local parlance);
– “Big men of the time, worked harder, worried more and ate less. Prestige and admiration was their only reward”. In a bid to outwit their ‘competitors’ in showing off their wealth, some of these big men, practically set their houses on fire to make a statement
#It is amazing how people still in some ways practice this today. WASTE!
• About Witchcraft….
– Witchcraft is not synonymous with Africa…it is a human thing. A spiritual experience. This section of the book showed that ‘the church & the practice of witchcraft characterized the conversation on the European continent from the 14th to 16th century. The state & the church considered it as a crime — and there was a premium on fighting it. Hence the word — witch hunting. Properties were confiscated….fees also were paid for torture and execution. It was a brimming industry. It is the source of the term — WITCH HUNTING.
– Science cannot validate sorcery (#No surprises)….
• Counter culturism: People are what goes on in their minds….and if you want to change their lives, give them better ideas. Our consciousness (dominant thoughts) controls the history we create and the one we tell ourselves. Whatever you do, make sure you do not objectify your consciousness. Make it subject to you. Keep it in your power. Counter it. Move away from the bandwagon. It is a veritable way to alter your life. For societies, this consciousness (awareness) is also important…
#Consciousness111
• And Others:
– “Gift makes slaves as whips makes dogs” – Eskimo proverbs.
End Note:
Zig Ziglar used to tell a story of a man that picked up a fight with his wife because she cuts off the tail end of the chicken everytime she prepares it in the kitchen and on asking her, she responded that her mother used to do it. They both then decided to ask the mother and she also said her mother used to do it and they called their grandmother to demand for an explanation….and she said because her bag couldn’t take the full size. #Funny but deep!
And it is the Nuisance Value of culture. Don’t just follow, ask questions!
Ps 1: See link to the book if you care: https://monoskop.org/…/Harris_Marvin_Cows_Pigs_Wars_and_Wit…
Ps 2: Follow-Up book: Patterns of Culture by Ruth Benedict
Ps 3: Just to say that there were a couple of many other things I didn’t understand…but yea, maybe with time it will get clearer.
Ps 3: Some keyword used: Behavioural science, Counter Culturism, Anthropology, Ethnography